This post is again way beyond its original stated timelines, and I can only apologize, especially to you Jane and plead mercy on account of extremely overwhelming work pressure and preparation of a certification exam! Moving on, about two years ago, Jane introduced me to the world of Margaret Kennedy, an author hereto unknown to me and whose works I absolutely fell in love with from the very start. I loved her Lucy Carmichael and The Feast and The Wild Swans and so many more! Naturally when Jane decided to host the Margaret Kennedy Day, I was not going to pass it up! And though I am really really late in posting about it, I thought as always, better late than never! 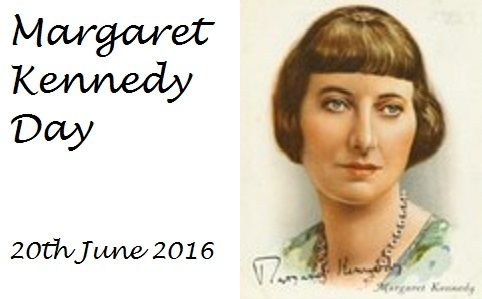 I was originally planning to read the Ladies of Lyndon for the event, however a last minute mix up at the library, propelled me to make another selection and I read Red Sky at the Morning! Set in the backdrop of early years of 20th century and ending in post World War 1 England, the novel follows the lives of the two sets of cousins – The Forbishers and The Crownes. Their mother’s were siblings and both had married poet. After Mr. Crowns involvement in a a murder scandal and fleeing from the country, the Crowne twins – William and Emily who had already lost their mother, were brought under the guardianship of their aunt, Catherine Forbisher, now a widow with two children, Trevor and Charlotte. The four children grow up together enjoying the same amusements and under the same care of the concerned, well-meaning albeit strict parent! They played together, fought together and made plans for the future! They had the company of Philip Luttrel, a neighbor and the Rector and their uncle Bobby who had been disowned by Catherine temporarily, on account of his staying with a married woman. he met in India , whom he latter married and who became their aunt Lisa. World War I interrupted their idyllic childhood and the Forbisher’s and Crownes returned for the war, determined to lead their lives in the best way they thought possible. Trevor moved to London in order to became a poet, the twins also took up an establishment in  London and William began to work on a play. Soon they developed a glittering social life, but the ties of past cannot be broken and will come back to extract a price on all!

As always, there is a lot to be admired in the this book! Margret Kennedy captures the childhood and the post World War 1 era marvelously. You can so picture the brilliant countryside in spring as well the glittering parties of London, especially the gentle mockery of the London social and theater scene . You can see the grotesque Monk Hall and you can see Emily’s bedroom in London….the word pictures are completely clear and absolutely delightful. There are very human relations that come through in the book – the love among cousins and the natural jealousy that transpires when one does better than the other and yet the feeling of a clanship when an outsider tries to close in. There are some lovely moments of bonding and wonderful evolution of characters, especially Catherine Forbishers. There are some superb  characters  and I cannot stress enough on the brilliant way the character of Catherine Forsbisher was drawn. There some maginificent, kind and empathetic characters in the ensemble that take your breath away – you cannot help but be touched by the self denying kindness of Mandy Hacbukett and be moved by Bobby’s devotion to Lisa or  his insights into human nature. Philip is another vivid character, somewhat of a cross between George Knightly and Colonel Brandon.But as a Margaret Kennedy work, it falls short! Not all characters completely evolve and come together, especially William’s. By page 100, you more or less know that there is tragedy in the air and are now just waiting for the axe to fall and when it does, you are not surprised that it fell, but rather that it manner it was done seemed altogether difficult to understand and extremely abrupt! In fact the book is filled with hurried tie ups of plot lines that should have been given more time to evolve and find a natural closure and as a result, the reading is jerky and at times tries your patience as points are driven in until you are ready to scream and some points are blink and miss! It is however a good read and we ought to read it once, if nothing else for the some of the wonderful characterizations and for an insight into an era long gone!

9 thoughts on “The Cousins”