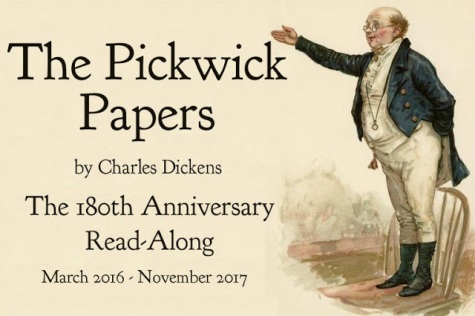 More than 2 years ago, O, who always sets the bar for heavy weight as well as innovative readings, came up with the idea of doing a 21 Month Read Along of The Pickwick Papers by Charles Dickens, in the chronology it was published. She shared that a friend of hers had advised her to read in that style to grasp the flavor of the original narrative. It was an interesting idea and I was very willing to give this novel a try, since my first reading, in my teens, did not make a significant impression. Besides, I wanted to see if I can control a book binge if hooked. Thus I in the company of many others, set along the path of what could be possibly one of the longest Read Alongs ever!!

The Pickwick Papers, chronicles, the adventure of Mr. Samuel Pickwick, a mature gentleman of independent means and head of the Pickwick Club and his chums; Mr.Tracy Tupman, a contemporary of Mr. Pickwick in age, but lacking the former’s sagacity and quite capable of falling in love, at the drop of a hat. Mr. Nathaniel Winkle and Mr. Augustus Snodgrass form the remaining partners in adventure; they are younger with unique talents – Mr. Winkle is a Sportsman and Mr. Snodgrass, a poet! They set out from London to explore unique and authentic phenomena across England and report them for the club. Thus begins a journey of a thousand miles; on the way, Mr. Pickwick picks up  young Sam Weller as his valet who sticks by his Master’s schemes through thick and thin. They meet the wonderful families and good for nothing confidence men. There is imprisonment on false charges and there are elopements, but nothing dims the optimistic and honorable spirit of Mr. Pickwick and his trusty aid, Sam Weller as they over come obstacles and challenges to find the most reasonable solution for all their dilemmas!

One of his first creations, one can see the brilliance of Charles Dickens coming through in the novel, though he was only 23 when writing it. There is wonderful characterization and gentle satire and sense of fun through all the 800 pages. There is confusion, adventure and rambunctious fun! Yet, despite all this humor, there is a harsh commentary on the 18th century English society. All the laughs he wrote out in the book, cannot take away, the harsh reality of the Debtor’s prison or the horrific conditions of people living without means. The corruption of officials and politicians are clearly called out with a scathing condemnation for a society unable to take care of it’s poorer population. Dicken’s sense of justice is passionate and we see glimpses of things to come in this novel. Some of the characters are really well drawn out, like Mr. Pickwick and Sam Weller and his father, and Mr. Jingle, who talks in hyphens, but others do not emerge all that clearly!  There are times, when you can make out that this was being written in installments, like, how the initial chapters have a story within a story for Mr. Pickwick to capture for the club and then there are no such episodes in the latter half. Similarly, technically, Mr. Pickwick’s chums began as the focal points after Mr. Pickwick himself, but somewhere the brilliance and sheer street smartness of Sam Weller took over and he become the second most important character of the book. Not that I am complaining, all one needs is one Sam Weller in the world, and one can fight through everything! But it does show, a bit of sketchy character development, with Sam coming through clearly and all there friends being clubbed together as muddle heads.

Like I mentioned, the first time I read the book, back in my teens, I did not get it! But sometimes the right book comes at the right time and that was the case, this time round, through it was over a period of 2 years. I could immerse myself in the book after a bad day at work or some other mental irritation and emerge happy and smiling. There were times, when after I broke off reading for one spell, it was difficult to connect the dots and remember all the characters, but these anomalies, resolved as I progressed and did not really impact my absolute and utter sense of joy when reading this novel.

All in all, I am super super glad to have given this book another try! A big shout out to O for coming up with the idea and for Cleo who always kept me on track with her regular posts!

10 thoughts on “The Longest Read Along – EVER!”