As many know, on 8th March diligently I do a post dedicated to Women’s Day. Mostly I review fictional characters who are the very role model of strong women and so forth! However today I wanted to take a bit of a different route and instead share a factual tale. It is a true blessing when you have a sisterhood of women, supporting and cheering you through the journey called life! This becomes even more precious, when your boss and peers are women, who also are part of you sisterhood. And all of this becomes exceptional when they sit nearly 28000 km away from you.

I know I have been raving about my long hours recently as well some personal stuff that I am working through. Recently another friend and peer, of mine. CM, visited our US headquarter on a business trip, where she met my boss , AB and my peer, AG. They sent a whole truck of gifts for me, but what was perhaps the most wonderful gift, was a handmade mascot that they created for me for”the project” that is taking 28 hours of my 24 hours . Knowing how stressed out I was, they spent a lot of time in this cheer-me-up mascot, so that when I feel down, I have a pick me near me. CM on returning told me of the kind of hard work that AB and AG had put in to make that mascot and after a bit of nagging, AG put down the story for me. I present the same, deleting out the specifics.

Here’s to the two brilliant woman, who truly inspire and uplift other women!! Thank You for being such an awesome cheering squad!

CM arrived in sunny state of _ US, to spend some time in the  _ Center. Little did she know, she would be a part of a grand plan to transport the Mascot back to its PMO Owner India. On the morning of March 3rd, 2016; AB and AG thought of a genius plan to give life to the Mascot of “the project”. Before they set out to collect the materials needed, they assessed if the fuzzy cactus was the optimal platform for the mascot. AB said, “I like the concept of the fuzzy cactus because it is a true representation of the tool itself.” AG replied, “I agree! But what should we make it out of?” They both thought about it for 23.4982 seconds and all of a sudden you could see the invisible lightbulb appear over their heads.

Off they went, down the stairs, past the cafeteria, through the turnstiles in the breeze way, out through the perimeter gate and across the street to Ml’s Craft Store. There they collected all the necessary materials and scurried back to their desk to begin the operation.

Next came the facial recognition of the mascot. AG asked, “Is this a happy mascot or a sad mascot?” AB confirmed, “Definitely a happy but goofy mascot.” So they continued the assembly operations with an image in mind.

AB and AG stood back and reviewed the mascot so far. Scratching their heads they said in unison, “Time for the fuzzy part?” Turning towards each other they yelled, “Yes!” and high fived. So off they went, adding more and more fuzzies all over using clear nail polish until the desired amount was added.

After adding the final touch of a mouth, they both looked at the mascot, tilted their heads to the side until AG said, “He is cute. He has a weird resemblance of George Washington, but I like it!”

AB probed, “Well do you think it is time to name him? What shall we call him?” AG thought a moment before speaking, “What about Prometheus?” AB replied, “What the heck! Does that have anything to do with “the project”?” AG advised, “I don’t know…I guess Prometheus was the protector of mankind so isn’t that like “the project” and it starts with ‘Pro’?” They both went back to thinking of a name. Then it came to them, “let’s call him ‘H’ they agreed.” AG started on the letters and started from the center to ensure perfect symmetry was achieved while moving to the right. AG thought to herself, Wow this looks great! She continued now from the center to the left. AG pulled the marker away from the flower pot to admire her perfect penmanship. Frightened, she said, “OMG AB I messed up!” Instead of writing there was no H and she instead had created a whole new word! AB busted into laughter. Tears ran down her face as AG began to laugh as well. After a full 60 seconds of laughter they both said, “Well! this will be his name since we cannot erase marker.”

So, ZZZZZ was born instead of “the project”.

AB said, “I love how cool he looks”, touching his fury little head. And then with a blink of an eye, Mascot was accidentally bummed and was falling slowly, rotating over and over until he made contact with the carpeted floor. There he lay with his body separated from his flower pot and his flower pot cracked in 3 different areas. In slow motion, AB reached down and picked him up and they both had gears turning in their head thinking What are we going to do? AG said, “We do have some super glue, I think that will work! Engineering at its finest, we fix things!” Within 28.76501 seconds, it was back in full form. 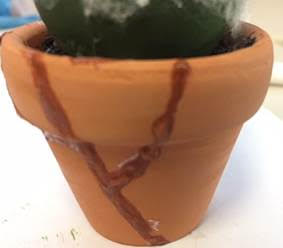 AB said, “You know, his pot actually looks like it has some real character now!” They both sat back and admired Mascot. Then something crazy happened! Mascot came to life!!! He said, “Hey AB! Hey AG! Can I borrow your cell phone? I would like to take a selfie of myself to send to my friends.” AB and AG looked at each other timidly and handed Mascot the phone.

Next, AB and AG packaged Mascot up for his trip to India and they said their goodbyes as they wiped away a few tears.

Remember, when things get tough with “the project”, just look at the mascot. He also had some struggles along the way but with a little super glue and ingenuity, he still was ok and made it to his final destination. Which will be the same for our project journey.

I have no words to describe how touched I am. The kindness and their support is beyond comparison and they both truly represent the strength and the generosity of women!

I would like to end with a big shout out to all my women readers/blogging gang and all those brilliant, and wonderful men, who enrich our lives every day!’

Happy Women’s Day you all!