As a child I was very lonely and did not make too many friends; in fact I downright hated going out and the thought of party – any party whether my own or my parents filled me with foreboding. I absolutely hated the social gatherings that my parents organized or attended. I was bored out of my senses and the constant feeling of inferiority, did not help in my making friends with the very small number of kids from my age group.  As it is, I was born very late to my parents and most of their friends had kids who were more than 10 odd years older to me, making me feel even odder. I think I was the only kid who ever went to dinner parties with her books….my only get away from being forced into companionship of much older or much dumber companions. Anyway, I grew up hating socializing and swearing to become a misanthrope and never troubling with company of anyone!  That is what I though until I went away to college ……

And surprise surprise……I was suddenly a social butterfly, albeit an intellectual butterfly, who chose to go to only selective dance through the night parties, but hell, I had a choice to pick any I wanted and what’s more, I was always flooded with invitations! (I am not going to dwell on why this change happened!! I do not know and one day I have enough money, I will have a psychologist go over my case and post his diagnosis on the blog!) 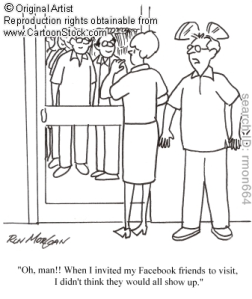 Things did not change as I got myself a job and moved in with my best friend. Despite her being a more or less confirmed and declared recluse, our house over the weekend bursts with friends and going outs etc etc. She does not per se like so many people coming over, including Mr Soulmate (she does not approve of him….like I do not approve of her men and we both think we can do much better and deserve so much better and all the nine yards! Sound familiar?), but she has developed a certain amount of tolerance from being forced to attend the gatherings that I organize and has even deigned to become friends with some of my friends.

As for me….I love it! I love being surrounded by people, especially friends who make me laugh and are completely crazy! I love surprise visits even at 4:00 am in the morning when I have read for hours and am about to drop off and suddenly the bell rings and I open the door to see some of my closest friends giggling and screaming surprise!! I love breaking out the drinks and cooking impromptu Spanish omelets (I defy you to find Spanish omelets of the type I make anywhere!!!!) and instant noodles for food and then settling down to talk for hours broken only by interludes for more food.

It’s not like all my close friends have the same level of intellect or same literary interests.  I have one set that can talk about books, music and Renoir for hours and they have nothing in common with the other set who embody the very core of corporate life style – dining out, spas etc; but the thing is that each of these sets are such fun in their own way that the two parts of me – the writer and project manager is equally entertained and refreshed by these gatherings! And at the end of the day, all the conversations moves in the same order regardless of the set – intelligent, argumentative, food breaks, witty, silly and then just funny…..a testimony to friendship; in the words of Ralph Waldo Emerson “It is one of the blessings of old friends that you can afford to be stupid with them.”