I recently read The Book Thief by Markus Zusak. Though this is not a new book per se, since it was originally published in 2005, but I read it just a couple of days ago and for me therefore it has all the joy of unchartered territory, especially since I had never read any work by Markus Zusak prior to this.

Markus Zusak is an Australian author who has written some great children’s work including The Underdog, Fighting Ruben Wolfe and When Dogs Cry. Though he received several awards and recognitions for these works, his breakthrough came with the The Book Thief which was as I mentioned first published in 2005 and since then has been translated in 30 languages and garnered the #1 position in The New York Times Bestsellers.

Now about the book – 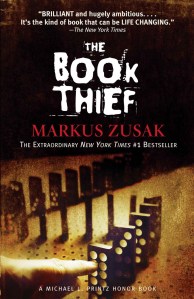 The Book Thief is set in Nazi Germany on the eve of World War II and it spans the years from 1939 -1944 in a town called Molching, Germany. The story’s narrator is Death (Yes! As in THE DEATH) and  begins as an eight year old Liesel Meminger is taken by her mother for adoption to a foster family – housepainter and accordion player Hans Hubermann and his wife Rosa Hubermann, whose washing and ironing for the richer households. The story then describes Liesel’s relationship with her foster parents, other residents of the neighborhood including Rudy Steiner, who becomes her best friend and Ilsa Hermann, the mayor’s wife and a Jewish fist fighter, who hides in Hubermann’s basement to escape the Nazis.

While the back cover synopsis may look very To Kill a Mocking Bird meet’s Schindler’s Ark, do not go with that kind of mindset, for this book is completely unexpected.  I do mean unexpected – it does cater to certain cliché’s like the German who does not want to be a Nazi or the German who risks his life to save a Jewish life, but that’s where the cliché’s end. This book is beautifully crafted, written with great depth and while the language is simple, since its attributed to a young girl, there is a lot of sensitivity and originality in the whole work. There are several instances of dry humor as well as some very upsetting moments, including one scene where I cried in buckets. (Yes! I do cry when I read books and no, I am not sentimental, just someone who is extremely sensitive!)  The plot is unusual not so much in the characters as much in the details and events of the tale. Another extremely rare aspect of the book is that at the very onset of each book (The novel is divided into 10 Books), the reader comes to know what will ensure in that book as well as the next, so in a way, the author gives away the ending, right at the beginning. However the power of the tale as well as the brilliant writing will keep the reader going despite knowing the obvious end.

New York Times wrote that “It’s the kind of book that can be LIFE CHANGING.” – I am not sure if it can be life changing, since we are all different people and we all react to things differently, but I can say this, that not to have read this is a loss and a big loss at that. This is a must read for all those who consider themselves books/novels/literature connoisseur, for this novel may be considered a  modern classic one day!!! It’s a poetic, touching and absolutely heartbreaking work that scopes out the immense generosity that humans posses.

5 thoughts on “One girl, some books and Nazi Germany”