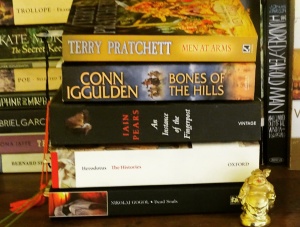 1) What fine part of the world are you reading from today?

2) Which book in your stack are you most looking forward to?

3) Which snack are you most looking forward to?

Something I make myself – Chocolate Fool; a concoction of Greek Yogurt, Cream and Chocolate
4) Tell us a little something about yourself!

Full Time Project Manager, Part Time Writer (wish it was in reverse) constant reader, frequent traveler, occassional cook, daughter/sister/friend and trying everyday to be a decent person
5) If you participated in the last read-a-thon, what’s one thing you’ll do different today? If this is your first read-a-thon, what are you most looking forward to?

I participated in the 2016 October Readathon. The one thing I did do differently was while I still have a motely crew of books, I kept the number of books in the list on lower side, so as to not confuse myself and lose precious time in deciding what  to read next!

Take on the Books –  Herodotus is brilliant as he takes on a sweeping narrative, part history and part derived from myths, across ancient Greece, Persia, Libiya and India. I am fascinated with the descriptions of the Scythians and think they may be closely related to present day Mongols. Will look it up later. In Men at Arms, Lance Corporal Detritus (Troll), Lance Corporal Cuddy (Dwarf) and Lance Corporal Angua (Werewolf) join Vimes, Carrot, Fred and Nobby to find out what really happened the Assassins Guild! Brilliant, funny and idealistically real, Sir Terry as always takes my breathe away – I am still laughing aloud at head honchetta/honcharina/honchessa!!

Take on the Books –  One of my all time favorites! I love this entire series that Mr. Iggulden has written about the rise of Chengez Khan and his dynasty. Stripping away commonly held myths, with deep research, this historical fiction constitutes everything that a good historical fiction must have – powerful narrative that mixes easily with the time it was set in, with great story telling and accurate history! This volume is an especial favourite – the first that I ever read, and was mesmerised by he brilliant writing as I rode with Chengez Khan to conquer Persia and Europe. It also has one of my biggest book crushes of all time – Subutai is right up there is my pantheon of bestest bookboyfriends, along with Fritz William Darcy, Captain Alex Randall and Ari Ben Cannon! 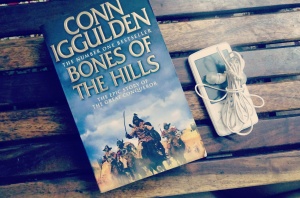 Take on the Books –  Still loving the read. Though the change in the character of Changez Khan from a far seeing ruler to someone blinded by personal prejudice is a bit difficult to digest, but then sometimes success does change a person completely. The narrative is still brilliant and I who usually skip battle scenes, is hooked on page to page. Subutai still rocks!

Snacks Update – Sandwich and Rose Tea to fight of slight onset of sluggishness! 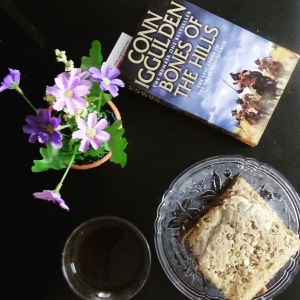 Mid-Event Survey!
1. What are you reading right now?

Bones of the Hill by Conn Iggulden

2. How many books have you read so far?

Half way through two different books

3. What book are you most looking forward to for the second half of the Read-a-thon?

Reading till the end with minimum or no sleep…can my body do it? that’s the question!

4. Have you had many interruptions? How did you deal with those?

Some, but good interruptions; using them as breaks!

5. What surprises you most about the Read-a-thon, so far?

How much I still enjoy the event! Also trying to keep up on social media can be a tad taxing!

Miscellaneous Note – no traction as fell off to sleep for 5 hours! 😦

Snacks Update – Masala Tea to get the day going!

Take on the Book – As always, Bones of the Hill leaves me speechless. The rise and the betrayal are overwhelming and it leaves much to ponder over, especially when one cannot really dismiss the thoughts under the guise of fiction. The rise of the Mongols did happen and what the great Khan went through despite all the negative history surrounding him, cannot be evaded Mr. Iggulden tries to give Subutai the due he deserves in the books of history – unfortunately, the Mongols produced a host of brilliant men 800 years ago and giving space to all of them is an ask. Despite the author manages to etch out the great General’s character and bring in the more humane side of him, especially when he leaves for his final command under Chengez Khan; your heart torn as you see one of the best General’s is history of warfare struggle to keep his loyalty to the Man who had raised him and to the boy who looked up to him. One of the best pieces of historical fiction, where Mongols, come alive and you can hear the war cries assaulting you from the pages of the book! 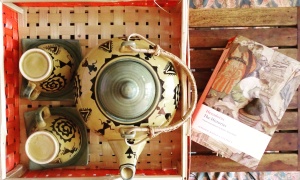 1. Which hour was most daunting for you?

2. Could you list a few high-interest books that you think could keep a reader engaged for next year?

3. Do you have any suggestions for how to improve the Read-a-thon next season?

I think you guys are just perfect! Though I think the Goodreads page could be simplified instead of multiple threads!

4. What do you think worked really well in this year’s Read-a-thon?

I think the Mini Challenges were awesome!

5. How many books did you read?

6. What were the names of the books you read?

7. Which book did you enjoy most?

Bones of the Hills by Conn Iggulden

8. Which did you enjoy least?

NA…I chose well this year! I loved everything I read!

9. How likely are you to participate in the Read-a-thon again? What role would you be likely to take next time?